In March 2014, the Wharton Business School Community (University of Pennsylvania) was happy to learn that the School’s full-time MBA program was ranked first in the U.S. (along with Harvard and Stanford) by US News.

The publications doing the rankings typically create scores by combining a variety of factors, including admission selectivity, starting salaries, and executive recruiters perceptions. One exception to the methodology, are the Forbes rankings, which uses return on investment of the MBA degree as the sole criteria.

Here are the ranks of full-time U.S. MBA programs from the most recent editions of four publications. 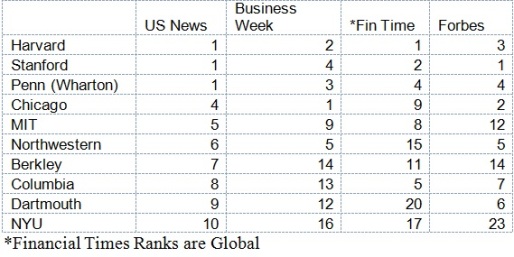 Considering the variety of factors and weights that go into creating scores, it isn’t surprising that there is some variation in the ranks among publishers.

The rankings for the top 15 or so MBA programs tend to be fairly stable.

For additional information see our business FAQ on rankings.